In Antarctic coastal waters where nutrient limitations are low, viruses are expected to play a major role in the regulation of bloom events. Despite this, research in viral identification and dynamics is scarce, with limited information available for the Southern Ocean (SO). This study presents an integrative-omics approach, comparing variation in the viral and microbial active communities on two contrasting sample conditions from a diatom-dominated phytoplankton bloom occurring in Chile Bay in the West Antarctic Peninsula (WAP) in the summer of 2014. The known viral community, initially dominated by Myoviridae family (∼82% of the total assigned reads), changed to become dominated by Phycodnaviridae (∼90%), while viral activity was predominantly driven by dsDNA members of the Phycodnaviridae (∼50%) and diatom infecting ssRNA viruses (∼38%), becoming more significant as chlorophyll a increased. A genomic and phylogenetic characterization allowed the identification of a new viral lineage within the Myoviridae family. This new lineage of viruses infects Pseudoalteromonas and was dominant in the phage community. In addition, a new Phycodnavirus (PaV) was described, which is predicted to infect Phaeocystis antarctica, the main blooming haptophyte in the SO. This work was able to identify the changes in the main viral players during a bloom development and suggests that the changes observed in the virioplankton could be used as a model to understand the development and decay of blooms that occur throughout the WAP. 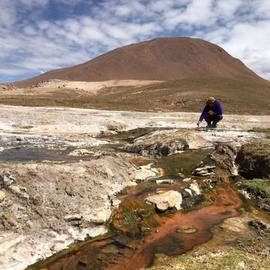 Next
The influence of temperature and pH on bacterial community composition of microbial mats in hot springs from Costa Rica
Previous
Genomic Features for Desiccation Tolerance and Sugar Biosynthesis in the Extremophile Gloeocapsopsis sp. UTEX B3054